The first time I encountered antisemitism was in college. It wasn’t directed at me per se, but it was a rally against Israel equating Israel with South Africa, and then, as now; Anti-Zionism is antisemitism. I never forgot that rally. It was an odd, new and uncomfortable moment for me as a Jew in the world.

For some students at Florida Atlantic University, after this week, they can now like me, say their first encounter with antisemitism was in college.

At Wisconsin in the early 1980s, the antisemitic phrases were on posterboard stapled to a wooden stick. At FAU this week, it was a table with a tablecloth and two students with an antisemitic hashtag who spent a good amount of time on the FAU breezeway before being removed.

It is as if over the decades antisemtism has planted its feet on the ground, not with a fleeting posterboard but a sturdy table. Ironically days before at FAU there had been a beautiful concert celebrating kindness benefiting the new Holocaust building to be built at FAU. This antisemitic event interrupted that.

When our lives are interrupted with unforgettable moments like this, what can we learn?

In this week’s Torah portion, there is also an interruption.

In the midst of the Exodus story, the movement of the Jewish people from slavery to freedom, all of a sudden the Torah starts listing the genealogy of the twelve tribes. It is not a complete genealogy and stops when it hits Moses and his brother Aaron in the family tree. Then Torah returns to the Exodus story.

What is the meaning of this interruption? An abrupt turn to a list of descendants but not a complete list.

For me it becomes a lens to look at the antisemitic interruption in the lives of those of us living in Boca Raton this week. It is worth stopping and reflecting on, and then just as quickly as Torah returns the story of the Exodus, we return to our lives. Again and again throughout Torah, there will be interruptions. It is a grammatical tool used by the biblical authors to remind us that the only thing that is enduring and sure is that the Jewish people and God have a relationship with one another.

Most of the time our relationship with God does not dwell at the extremes but in the middle. But when an interruption comes – whether good or bad, whether in text or in life, it is a reminder that it is time to pay attention. To ask why this happened, what does it mean and how can I perpetuate the good interruptions and create a world that combats the bad ones.

This week I was at a ceremony convened by US Representative Lois Frankel that celebrated Ben Ferencz, a past recipient of the Project Nuremberg Jay and Marilyn Weinberg Rule of Law Award at Temple Beth El; who received the Congressional Gold Medal, the highest Congressional honor. 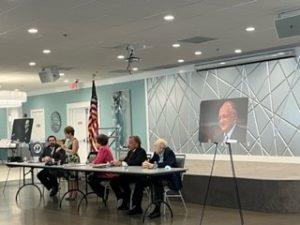 To pass the Gold Medal bill requires two-thirds of members of the House of Representatives and the Senate, and obviously must be a bipartisan effort.

How rare is this honor? George Washington in 1776 was given the First Congressional Gold Medal and it has only been given184 times since George Washington. To Rosa Parks. To Mother Theresa. Less than one person a year.