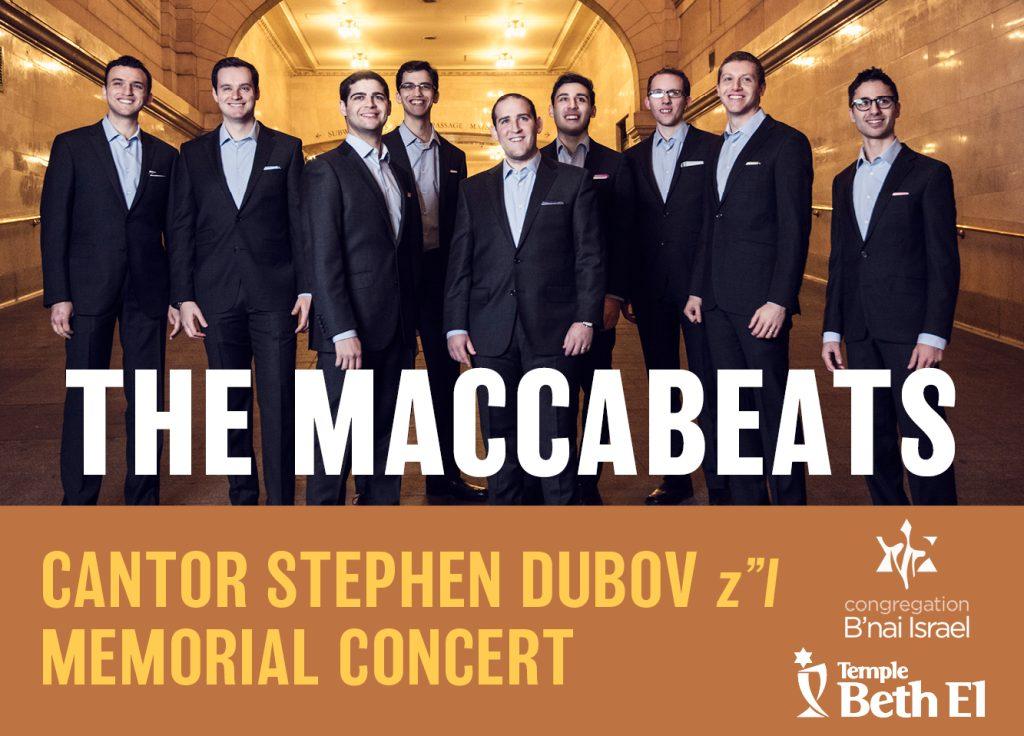 Temple Beth El of Boca Raton will present the Cantor Stephen Dubov z”l Memorial Concert in honor of its 14th anniversary on Sunday, February 13, 2022 at 3:00 pm at their Schaefer Family Campus in east Boca Raton. Only four hundred tickets are available for this blockbuster event starring the incomparable Maccabeats.

Billed as “The Maccabeats: An Afternoon of Exciting A Capella Music,” this talented musical group who have attained much fame as performers on YouTube, have traveled the globe entertaining hundreds of audiences along the way.

Using nothing more than the unadulterated human voice, a clean-cut presentation, and a little Jewish humor, this unique group of singers is able to connect with fans of all backgrounds and ages. The Maccabeats have truly caught the eye of the world with their success.

“I’m so excited to honor the memory of Cantor Stephen Dubov z’l with the performance of the Maccabeats. Cantor Dubov would love the joy that the Maccabeats bring to all ages with their fun and catchy arrangements to a wide array of musical styles. The many people who will attend this high energy concert will bring honor to Cantor Dubov’s memory,” said Cantor Lori Brock of Temple Beth El.

Since the passing of Cantor Stephen Dubov in 2006, commencing in 2008 the concert has rotated between Temple Beth El of Boca Raton and Congregation B’nai Israel in Boca Raton. Both synagogues are excited to resume the concert in-person, once again.

Cantor Dubov arrived at Temple Beth El in 2006, with a stellar reputation of having the ability to hit every note and to inspire. Just a month after his arrival, he passed away unexpectedly in Detroit while returning to his family to help them prepare for their move from Michigan to south Florida to join him.

Born in Miami Beach, he earned a Bachelor’s degree in music education from the University of Miami and he received his cantorial investiture and Master’s degree from the Hebrew Union College. In addition to becoming a cantor, the former movie, television and stage actor had a diverse and distinguished career, which included a regular role in the daytime drama Guiding Light, performances in Miami and Palm Beach operas, Los Angeles Philharmonic and on Broadway, as well as appearances in more than 100 films.

This not to be missed lively musical performance in memory of Cantor Stephen Dubov z”l is open to the entire community. Tickets are available online now. Reserved Benefactor Seating $100/Preferred Seating $40/General Admission $ 20. Click here for more information and to Register Online.

* Covid safety protocols will be in place,  including masks being required for all attendees regardless of vaccination status (which is highly encouraged),  as well as seating capacity limits.

Originally formed in 2007 as Yeshiva University’s student vocal group, the Maccabeats have recently emerged as both Jewish music and a cappella phenomenon. With a large fan base, more than 20 million views on YouTube, numerous TV appearances, and proven success with four albums, 2010′s Voices From The Heights, 2012′s Out Of The Box, 2014′s One Day More and 2015′s A Maccabeats Hanukkah. Though the Maccabeats aren’t “your grandfather’s synagogue choir,” their ideology and identity play an important part in what they do. Strongly committed to the philosophy of Torah u-Madda, the integration of traditional and secular wisdom, the Maccabeats perform an eclectic array of Jewish, American, and Israeli songs. Their breakthrough piece, Lecha Dodi, is the epitome of this synthesis, combining some of the most beloved words of Jewish liturgy with Leonard Cohen’s meaningful and melodic Hallelujah.