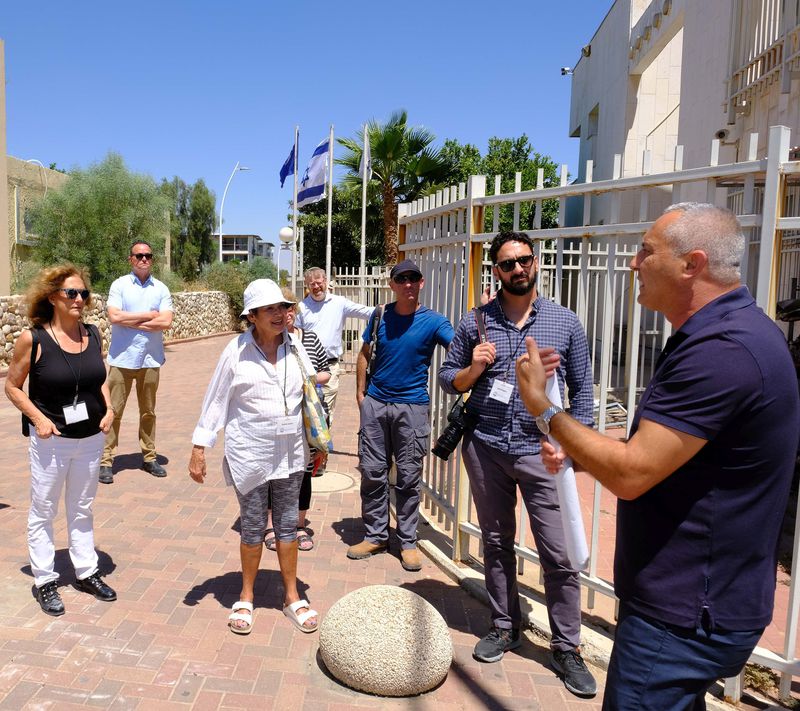 South Florida Jewish leaders visited Israel on solidarity missions to show their support following the recent crisis.  A group of 16 South Florida rabbis – 11 from Miami-Dade County and another five from Broward and Palm Beach counties – traveled to Israel on a four-day mission.

Rabbi Jeremy Barras of Temple Beth Am in Pinecrest organized the South Florida Rabbinical Solidarity Mission to Israel. He worked closely with Rabbi Frederick Klein, director of the Greater Miami Jewish Federation’s Mishkan Miami and executive vice president of the Rabbinical Association of Greater Miami, to plan the trip.

The rabbis met individuals and families that were personally affected by last month’s rocket attacks, visited an Iron Dome battery and met with Talia Levanon, director of the Israel Trauma Coalition at the Ashkelon Resiliency Center. Mission participants also visited Kibbutz Kfar Aza, a community of nearly 1,000 people only one mile from the Gaza border.

A few of the participating rabbis commented on their experience.

Rabbi Dan Levin of Temple Beth El of Boca Raton said, “I think one of the things that was most inspiring was how often we heard from people in all different sides of this [Israel-Palestinian] conflict that they were not giving up and that they were instead renewing their commitment to trying to forge a better future, and that perhaps from the horror of this recent violence can come a new commitment and new initiatives to build a more collaborative, cohesive and peaceful future.”

Rabbi Andrew Jacobs of Ramat Shalom Synagogue in Plantation said, “I went wanting to share my love with the folks there, and I returned with an amazement at the love that every Israeli that I met there, including Jewish Israelis and Arab Israelis as well, have for their country and a desire, despite what we read in the headlines and on social media, to work together and to build an even stronger Israel.”

Rabbi Josh Broide, director of the Jewish Federation of South Palm Beach County’s Deborah & Larry D. Silver Center for Jewish Engagement and outreach rabbi at Boca Raton Synagogue, said “We had a chance to travel to the communities that sit on the border near Gaza and met with their leadership to try to understand the unique challenges that they face.”

“In spite of these challenges, their communities are thriving and growing in the number of people that call that area home,” Broide continued. “The city of Lod was on the forefront of the recent conflict and we had a chance to meet with local leaders as well as members of the community from both the Jewish and Arab community to hear first-hand how events unfolded.”

Rabbi Ben Herman of Bet Shira Congregation in Miami said, “Visiting Lod where we met with both an Arab school and a Jewish community was very eye-opening.”

“They had parallel stories, but it was like they were talking past each other,” Herman continued. “We saw a Jewish apartment that was burnt – could still smell the smoke and sewage and saw a bed burnt to a crisp – and I will never forget what that felt like.”

The Jewish Federation of Palm Beach County also sent a group of leaders on a solidarity mission to Israel.

The Federation’s group consisted of 10 Palm Beach community leaders who visited the Israel Trauma Coalition, spent time at an Ethiopian absorption center, met with leaders and much more.

Rabbi Leonid Feldman of Temple Beth El in West Palm Beach said the trip was more emotional than an average one to Israel.

“I have taken probably 20 groups to Israel over the years, and it’s always emotional, but this was exceptional in so many ways,” Feldman, who was involved in planning the mission, said.

Feldman continued, “The reason why I felt the trip was important is that this was a terrible crisis, one in which I think was the worst, even though it was also horrible in 2014.”

“This was the worst in so many ways because we spoke to people such as military experts who said that Hamas wanted to overwhelm their defense system,” he continued. “We went on this solidarity mission to say to Israel, ‘We are with you, you are not alone.’”

Another participant, Jason Rogers, a lay leader and past chair of the Federation’s Emerging Leadership Program, said, “The purpose of this trip was to show people in Israel that people around the world stand with them and we’re concerned for them.”