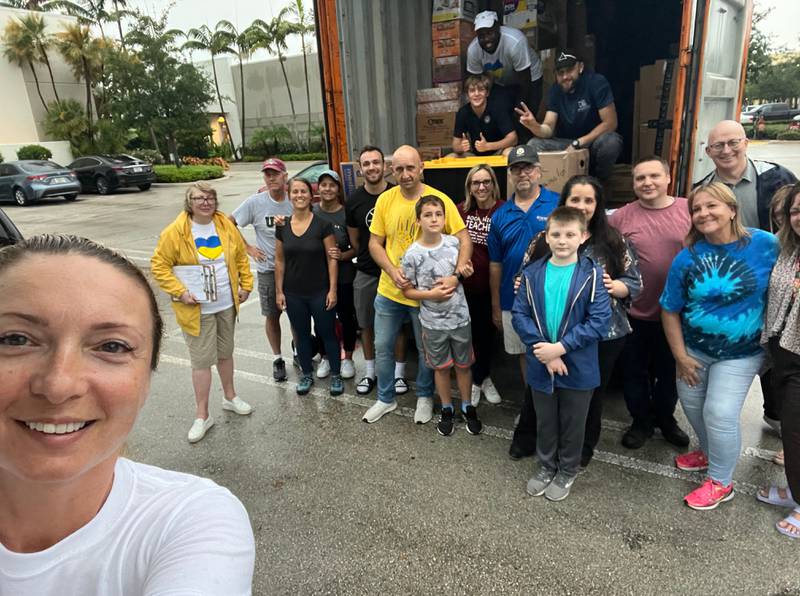 Kemper-Reiss is a Ukrainian American who lives in Boca Raton and who moved to the United States from what was then Soviet Ukraine in 1989. Due to the Russian invasion in her home country, she initiated Boca Helps Ukraine. The organization’s mission is to provide help and hope to those who have remained in the country.

“I’ve been in touch with the clergy and I know them very well, so when I talked to them, everything just fell into its right place,” she said. “I’m so happy they were there to support me.”

On a recent weekend, the organization had volunteers load trucks at its warehouse site at Park Place Shopping Mall in Boca Raton with tens of thousands of pounds of humanitarian aid items donated by the community for shipping to Ukraine. Kemper-Reiss had help from Temple Beth El members and people from the community in which she lives.

“It was incredible to see the willingness of this community step up and help,” she said.

Kemper-Reiss noted that it mostly rained on one of the days that weekend.

“I had people in ponchos who were totally soaked, but they kept going,” she said. “It was an all-out effort.”

Kemper-Reiss also said, “People come up to me and tell me how impressed they are with Ukraine because it is standing up to a country that’s bigger and stronger.”

“They want to help even more, and standing up for the underdog is something that resonates with many people here,” she continued. “This is an underdog that’s fighting for its freedom and its future.”

To distribute supplies, Kemper-Reiss has partnered with her longtime friend, Igor Smelyansky, CEO-director general at the Ukrainian National Postal Service (Ukrposhta). The container of the donated supplies is being loaded on to a ship that’s heading to Poland. It is expected to be in Poland toward the end of June, and Kemper-Reiss is hoping it gets to Ukraine in early July.

Financial support is also being collected through Temple Beth El of Boca Raton’s Disaster Relief Fund online or via checks sent to the temple. Note donation is for Boca Helps Ukraine.

Visit bocahelpsukraine.org for more information on the organization, and tbeboca.org/event/ways-to-help-ukraine/ for the synagogue and local efforts in helping Ukraine.